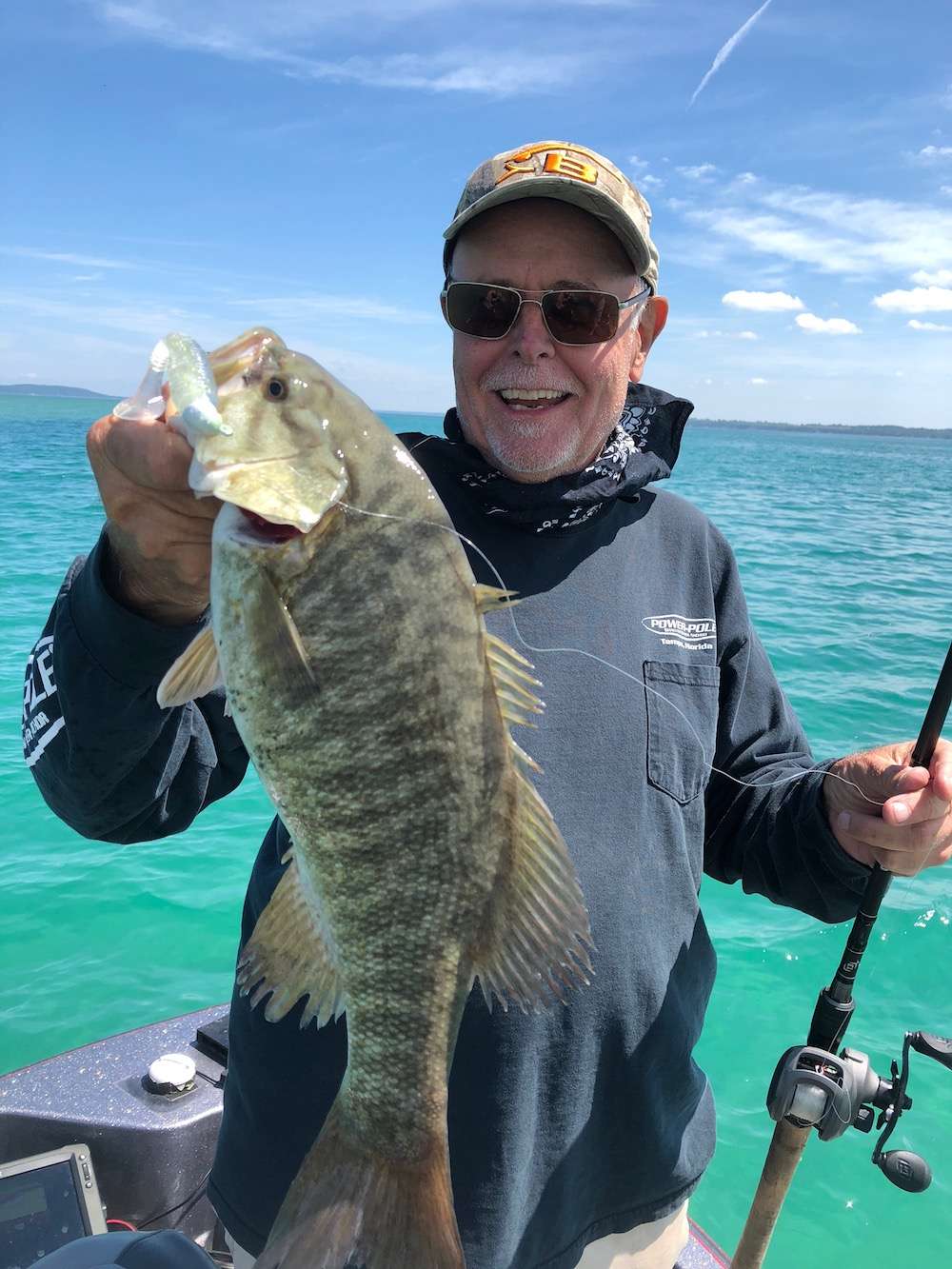 Most smallmouth experts agree that prespawn is prime time to whack a trophy bronzeback. They’re moving shallower and putting on the feedbag big time after a long winter, and those big females are getting a serious attitude as their bodies bulk up with eggs. When, where and how you catch these gorillas depends on what region of the country you’re in, so we’ve called on two veteran smallmouth guides — Michigan’s Chris Noffsinger (www.northernadventuresfishing.com) and Tennessee’s Jim Duckworth (www.jimduckworth.com) — to share proven prespawn strategies and patterns for their respective regions. Their input, presented in their own words, should put you on big smallies regardless of which side of the Mason-Dixon line you’re fishing.

Up here, smallmouth spawn on sand flats from June into July, with the full moon often triggering a major spawning event. I’ve seen ’em spawn in 56-degree water, but 60 to 64 degrees is more typical. Sight fishing for bedding smallmouth is extremely popular on clear Northern lakes, but I find prespawn fishing more challenging and exciting. Not only will you catch plenty of big fish then, you’ve often got the lake to yourself.

While Southern smallmouth fishing primarily takes place in reservoirs, we Northerners mainly fish natural lakes. I guide on Lake Michigan as well as on a number of inland glacial lakes; all of these smallmouth-rich venues are extremely clear and unbelievably deep — Grand Traverse Bay, near Traverse City, Mich., is 620 feet deep in places. While Southern smallmouth reservoirs are often full of submerged wood cover, the main form of cover where I fish is rock. I think cover is highly overrated for smallmouth, anyway; in Northern lakes, they’re more likely to relate to a structural element such as a dropoff, point or flat.

Duckworth fishes those ice-free Tennessee lakes all winter long, but I don’t even pull my boat out of my garage until late April, when our ice has finally melted and Michigan’s catch-and-release season opens. Of course, smallmouth don’t have any idea what month it is; their movements and behavior are governed by water temperature, not the calendar.

In Lake Michigan and the inland lakes I fish, smallies will spend the winter suspending over deep water, sometimes at depths exceeding 125 feet. Once the ice melts and we get a few calm, sunny days, the water temp begins creeping into the upper 30s, and they’ll enter their early prespawn phase. They’ll move to what I call “hard breaks” —sharp, vertical dropoffs, often found at the extreme outer edge of spawning flats. The depth varies, but I’ve caught some giants during early prespawn on breaks that were 20 feet deep on top and bottomed out at 60 feet. An interesting fact I discovered while perch fishing after ice-out: Early prespawn smallies love hard breaks with a muck bottom. “Wigglers” (mayfly larvae) live in that soft muck, and smallies in icy water will gorge on them, probably because their metabolism is slow and bigger prey take too long to digest. You’re not going to catch a boatload of fish in 38-degree water, but you’re liable to hang a real monster now — my biggest late April smallmouth weighed 7-10. If you can tolerate frigid weather, this is a good time to hit a Northern lake and get your string stretched.

My go-to early prespawn lures are 1/2- and 3/4-ounce silver and gold Silver Buddy blade baits. Because they sink quickly and put out tremendous vibration and flash, blades rule when smallies are sitting on bottom in deep water. I’ll cast the Buddy to the shallow side of the break, tight-line it down the slope, then pop it off the bottom so it vibrates frantically — that’s when they’ll usually nail it. When the water warms into the mid-40s and the fish get a little more active, I’ll also try a silver or gold River2Sea Glassie Vibe lipless crankbait, fished with that same drop-and-pop retrieve — they’ll whack this lure so hard, they’ll practically rip the rod from your hand! The transition from early to immediate prespawn generally takes place when the water temp tops 48 degrees. Now the fish move to points and shallower breaks — 10 to 20 feet, 8 to 16, etc. — and may be either suspending or bottom-oriented. Because they’re feeding on crawfish now, they like a harder bottom with scattered rocks. The Goby Replica, a super-realistic lure made by Lake Erie smallmouth expert Joe Balog, is deadly when they’re on this pattern. When the water warms to around 56 degrees, you can wear ’em out at the edges of big sand flats on jerkbaits such as the Lucky Craft Pointer and Rapala X-Rap. Last May, a client of mine caught 110 smallies in a single day on this pattern! On calm, sunny days, the narrow band of water tight to shore will heat up a couple of degrees, and smallies may pack in there in stupid numbers, making for tons of fun with a lipless crank or floater/diver jerkbait. Once the lake hits the upper 50s to low 60s, they get the “urge to merge” and move onto those sand flats to spawn. Winter smallmouth fishing is huge in Tennessee because our deep highland smallmouth reservoirs remain ice-free. In January, these fish will suspend off steep limestone bluffs where they feed on immature baitfish. We catch ’em on the float-and-fly, a tiny (1/16- to 1/32-ounce) hair jig fished below a bobber, when the lake temp is 37 to 39 degrees. (Note: Duckworth offers an informative video showcasing this finesse method on his website.) By late February, we’ve usually had a couple of unseasonably warm rains, causing the lake temp to jump up quickly into the 44- to 45-degree range. This triggers smallies to enter their early prespawn phase by gravitating to deep, steep points on the main lake and in the bigger tributaries. Here, they’ll suspend 15 to 30 feet deep, sometimes over 100 to 120 feet of water. If it’s not too windy and the lake is clear, you can catch these suspenders on the float-and-fly. On windy days, however, I’ll switch to a silver 1/2-ounce Silver Buddy on those same deep points. Many of our highland reservoir points have a series of “stairsteps” or short ledges on them; smallies will sit on those little steps, often 18 to 35 feet deep, then rush out and grab passing baitfish. I’ll cast the blade to the point, let it sink on a tight line, then hop it down one ledge to the next in 5-foot increments. In March, when the water first hits 50 degrees, you can have a blast casting a clown-pattern Rapala Husky Jerk or a 200-series blue splatterback Bandit crankbait to rocky points and 45-degree channel banks, especially on days when the wind is howling out of the south or west. Waves crashing against the rocks will put those big boys right against the bank, and they’ll bite savagely. On calmer days, they’ll back off these structures and suspend; now I’ll fish the jerkbait with hard, repetitive snaps, jerking it bam-bam-bam, then pausing, then bam-bam-bam, repeating this pattern all the way back to the boat. I’ll also throw a Big Hammer swimbait now, casting it shallow and slow rolling it out from the point or bank over deep water — they’ll swim up a country mile to eat it. Early prespawn smallies will often relate very loosely to structure; sometimes they’re two or three cast-lengths off a point or channel bank. So if you’re not getting bit by casting to shore, turn and cast out toward open water — that’s probably where the fish are.

Our smallies enter their immediate prespawn period once the water hits 55 degrees, typically by mid- to late-March. They’ll move to long, slow-tapering gravel or clay points within a few casts of their eventual spawning areas. The water can get pretty roiled up on these points due to seasonal rains and gusty winds, and big smallies will move up surprisingly shallow on them to forage for crawfish. I’ll cast a red craw Bandit crankbait up shallow and root it down the point to 8 feet or so, alternately grinding it into the bottom and then killing it so it starts to float back up. I once caught an 8-pound smallmouth on this pattern and have had mornings where I’ve boated a dozen between 5 and 6 1/2 pounds crankin’ those flat points.

Southeastern reservoir smallmouth start spawning in 58-degree water and will continue bedding until the lake heats up to 66 degrees. They prefer pea-gravel flats with a few scattered stumps for nesting. Unlike the North Country where Noffsinger guides, I very seldom see them on beds down here where I fish, either because they’re not shallow enough or the water is too stained.

Thinking about it, every place both Noffsinger and I mentioned where we catch big prespawn smallmouth is either in or close to deep water. That’s just the nature of these awesome fish, no matter where they live.

The ability to adapt