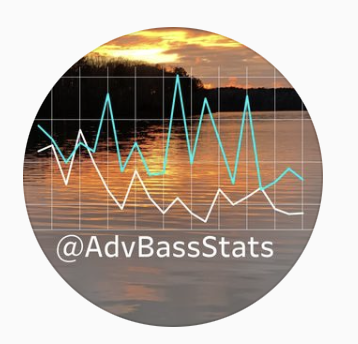 Can you tell the story of a bass fishing tournament without pictures of fish and boats and anglers? We’re trying. In this episode of ADVBassStats (Advanced Bass Fishing Statistics) event reviews we look at the data from the 2022 Guaranteed Rate Bassmaster Elite Series event at Mississippi River, Aug. 26-29, 2022, in La Crosse, Wis. Find more analysis like this by following along with the ADVBassStats account on Instagram or Facebook

Looking through the current angler roster, the last B.A.S.S. event any had competed in here was a Bassmaster Open in 2019, and the last Elite Series visit was in 2018. History showed 11 anglers in the current field with prior Top 10 finishes, and only Rick Clunn with a win. What this history did not show was Bryan Schmitt’s win here in a 2017 FLW Tour event – it turns out that would have been an interesting bit of information.

Last-chance qualifying for the Classic

One drama playing out in this final Elite Series event of 2022 was the competition for Progressive Bassmaster Angler of the Year points to get into the 2023 Bassmaster Classic. At the start of this event, the projected Classic cut was 43rd place in the AOY standings.  After Day 2, Carl Jocumsen held 43rd, but his tournament and season were done so he could only watch what the anglers above and below would do on the final two days.

Keith Combs was out of reach via AOY points, but the final Elite event of the season came with an automatic Classic qualifier for the winner. He was in contention, sitting third after Day 2 and climbing to second after Day 3, but he couldn’t catch eventual winner Bryan Schmitt to take the win and the bonus.

By the end of the event, Brock Mosely had risen past Jocumsen, Hunter Shryock had dropped behind Jocumsen and Shane LeHew and Schmitt’s win meant that he was a double qualifier so the cutline should move to 44th, picking up LeHew (not yet confirmed).

Classic qualification isn’t complete until the Opens season is over, as Opens winners can also be automatic qualifiers. There are still four chances for a double qualifier to win an Open and move the Elite Series AOY line further down the list, or for a non-qualified Elite Series angler to win and push themselves into the Classic.

The primary characteristic of this event was how close to the same size all the fish were. The weight distribution charts were very flat, with an ounce or two separating most of the places from above and below. The daily distribution looked nearly identical the Overall (Day 3 above).

Bryan Schmitt led after Day 1, then Chris Johnston took over on Days 2 and 3 and went into Day 4 with a relatively giant 1-pound, 13-ounce lead over Combs in second place.

With a full complement of Marshals, we had a pretty good live view of catching stats throughout the tournament. Day 3 was a good example of how different anglers’ days went.

On the left is Jay Przekurat, whose Marshal uploaded 40 fish catches on the day (almost three times more than anybody else in the field). Przekurat caught his best fish early and continued to catch smaller fish through the day but wasn’t able to cull after 9:30 a.m. He wound up 3 ounces outside the Day 4 Top 10 field.

On the right side is a zoom-in on the second half of the day for the three leaders, each of whom had a flurry of big afternoon culls, essentially replacing their bags and sealing their top three places for Day 4.

Schmitt started Day 4 just 2 pounds, 1 ounce behind Johnston. His final day 16-11 combined with Johnston’s 14-6 gave Schmitt a 4-ounce victory and a big blue trophy. Brandon Lester made a big charge on Day 4, bringing a tournament-best 18-7 bag to jump from 10th to fourth.

In the other major drama of the week, Johnston and Lester both made life interesting for 2022 Angler of the Year Brandon Palaniuk, not giving an inch in the AOY race all the way to the end. Palaniuk’s season-long hold on the AOY lead was in jeopardy to both Johnston and Lester on Day 2. Palaniuk made a late Day 2 catch that pushed him into the Day 3 cut, followed by a solid Day 3 to finish 25th in this event. That gave him enough points to clinch his second AOY title.