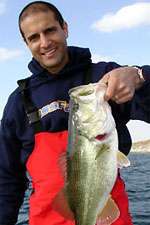 Lake St. Clair and the Detroit River (also Lake Erie) shouldn’t be a mystery to any of the Elite Series anglers, particularly coming off their recent tournament at the St. Lawrence River. In other words, like that event, the Elite Series Plano Championship Chase will be all about getting on the right quality smallmouth bite.

There won’t be any shortage of fish, and with BassGold it’s easy to see – given relatively consistent weather – what it’ll take to win: Winners at various levels of tournaments on St. Clair and the Detroit River (plus the west side of Erie) have averaged 21 to 22 pounds per day. BassGold also shows that weight can come out of St. Clair, the river or Erie. That’s the good part. Let’s see if BassGold can narrow that down a bit.

Unlike the St. Lawrence tournament, which was almost all about drop shots, this tournament could be different. As you can see from the baits graph, a variety of baits have done well. And while drop shots are certainly a major tool, faster-moving baits like spinnerbaits, jerkbaits and crankbaits are a bigger part of the mix.

This means that you won’t have to be a drop shot ace to do well in this event, and guys who like to fish fast (KVD anyone?) will be able to do that.

That said, BassGold’s pattern summaries show that in the last major event fished on St. Clair – an FLW Tour event at the same time last year – the top five anglers all used drop shots. (Fantasy players: Elite Series angler Chad Pipkens finished third in that event, and is coming off a 10th at the St. Lawrence.)

Where to Find ‘Em

BassGold shows that tournaments are won in the river, but about a quarter as many as in the lake. So it sounds like the lake is the deal.

Once you’re out there, it seems like the key is to find something different among the underwater sea of rock and vegetation. Looking at the Habitat Factors graph and skimming BassGold’s pattern details from past events shows that sand spots, gravel patches and vegetation clumps seem to be important, with the presence of bait a big help.

The bottom line is that whatever it takes to find and catch ’em, the Elites will do it. Can’t wait to see how this one turns out.

A final note: Bear in mind that the above is how I interpret what BassGold is showing based on my experience fishing and covering these events. You might see other things differently, which is part of the “gold” that BassGold provides. It’s an extremely valuable tool for serious anglers who take the time to understand it. I hope you do.

Put this incredible tool to work for you. Save 15 percent on the one-year subscription price by using code BASS132 (case sensitive) when you sign up at BassGold.com. Note that BassGold offers a three-day free trial, and B.A.S.S. Nation members can get it free for a year!