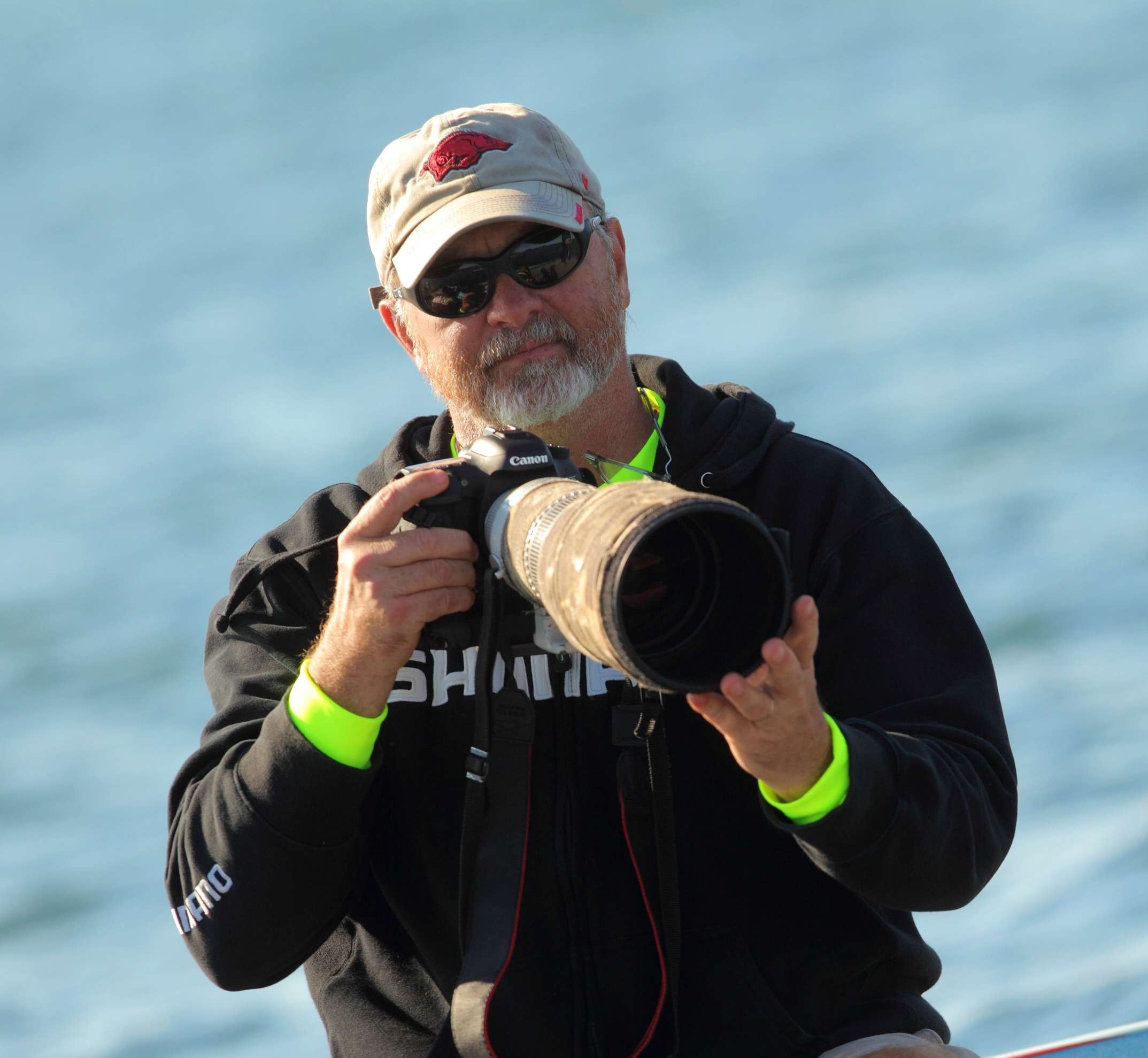 Rick Mason is one of the most viewed, yet unseen men in Bassmaster history.

Mason, a Bassmaster cameraman for the past 17 years, passed away Monday of a heart attack. The 54-year-old man best described as a “quiet giant” behind the scenes of Bassmaster has left a gaping hole in more ways than one among the Bassmaster family.

“I’m still in shock,’’ said Kevin VanDam, who had spent many competition days with Mason as his cameraman. “He’s like a brother to me. He’s always been that positive influence, quiet, strong: The guy you want to have a beer with at the end of the day.”

To most of the Bassmaster faithful, Mason is the sandy-haired block of man toting a camera in the back of a leader’s boat during an Elite Series event, bringing exciting catches and heart-breaking moments to life with his video camera. Lately, with Bassmaster LIVE and the raw nature of the event, he’s the unseen voice asking questions, to flesh out the story on a featured angler. His presence, though, is woven throughout virtually every part of a Bassmaster event.

He, along with his brother Brian Mason, were the Mason Boys, both nephews of Bassmaster co-owner Jerry McKinnis, but together recognized as the de facto backbone of the road crew for any and all JM Associates television projects, including Bassmaster.

Mason passed Monday, doing work he loved next to the man he admired most in life, McKinnis. The two were clearing an area where construction was set to begin later this week on McKinnis’ new home near Flippin, Ark.

In a fashion that had come to define him, Mason refused to quit until the job was done, even with the urging of McKinnis for them to call it a day. Mason took a break, but when he got up to return to work, fell over and was never revived.

He leaves behind a wife, Sherry, a step-daughter, Ashley Wells, a mother, Judy, two younger brothers, Brian and Jeri Rhine, along with a company of men and women in JM Associates and Bassmaster who looked on him as a brother, loving him for his work ethic, his honesty and integrity to everything he worked on.

And he worked on everything.

Mason was hired as truck driver for JM Associates in 1999. Along with his brother, they were required to drive all the production equipment to every event, including a 26-foot equipment trailer, a 30-foot production trailer and a jumbo-tron. In the past 17 years, the duo have logged almost 1 million miles across virtually every state in the lower U.S. Getting the equipment there wasn’t enough for either of the Mason Boys.

Rick Mason wanted to be a cameraman as well. Described as “really creative and hard-working” McKinnis gave Mason a shot with a camera during the 2001 Bassmaster Classic in New Orleans. It was the first year ESPN had taken ownership of B.A.S.S. and having an extra camera on the water seemed like a good idea.

What McKinnis couldn’t foresee was Hite having an incredible day, one that shot him from out the running into the top 6 or 7.

“With everything at stake I felt like I really needed to put one of our veterans in the boat with Davy,’’ McKinnis recalled. “I called Rick to tell him that, but before I could say anything, he said, ‘I know why you are calling. Davy did good now you have to replace me.’

“Then he proceeded to beg me to not to take him out of the boat. He said, ‘Please give me a chance to stay with him.’

“I was taken aback,’’ McKinnis said. “I thought for a moment and said ‘I’ll call you back.’”

McKinnis then reached out to Hite, who basically told him how hard Rick had worked that day and how well he thought everything went.

“Davy was shocked that was his first time on the water,’’ McKinnis said. “He told me to leave Rick in the boat with him. I did and Rick was so excited for that.”

That exchange transformed a lot of things for Bassmaster Television. Soon both the Mason Boys would work as cameramen at all the events, working their way into the hearts of all the anglers who would spend a day with them.

“Someone told me today that most of the bass fishing world don’t have a clue as to who Rick Mason is, but to the bass fishermen he’s a legend,’’ McKinnis said. “That’s so true.”

“When you got into the boat with Rick the first thing you noticed was his work ethic,’’ Davy Hite said. “He’s just a strong, quiet hard worker.

All anglers know the hard work of just getting to an event. Most realized quickly the Mason Boys were one of them. They would drive the hard miles to the events. Get the equipment there, set it up, run all the wires and cables needed to make things come alive. Then they would charge batteries, clean equipment, set up tents and be the first ones on the water with a video camera when the event kicked off. After a day on the water of riding waves, fighting the elements they would hit land and sit for another 3 to 4 hours videoing the weigh-in. Once that was over, everything had to be stored, charged and cleaned and ready for the next day. That is a four-day process and often Mason was on the road for six weeks at a time.

“Rick never complained once,’’ McKinnis said. “It wasn’t in his nature. His nature was to work harder than anyone else, and make sure it was done right. That work ethic made him one of our strongest shooters on the water and off the water. It will take three people to replace him, at least.”

Mason had a fascination for the natural world, taking advantage of the Ozarks when he was home, sometimes hunting for Morel mushrooms, other times exploring the many caves in the region as an accomplished spelunker. Other days would be spent doing handiwork for McKinnis near his home, where the two often worked together.

“The thing that struck me about Rick was he always wanted to be with the winner,’’ McKinnis said. “It’d be days after an event, and we’d be working he’d be pissed off that his guy didn’t win.

“I think the guys who had him in the boat with him could feel that support as well. He was working for them and he wanted them to win and he wanted to be the one to showcase them.

“That says more about him than anything. He didn’t want any part of the limelight, but he’d dang sure work his butt off to get someone else in there.”

That attitude was prevalent in rough events. Mason was with Aaron Martens when he won the Toyota Angler Of the Year title in 2013 on St. Clair. Martens was making the long ride to Erie every day in an event that was ultimately defined by nasty waves. Mason had the opportunity to get out of Martens boat and make the drive back on land but wouldn’t take it.

“If I do that, then I might miss something important,’’ Mason said at the time.

On the ride back, the waves were so brutal they sheared the mounting bolts from the motor to jack plate on Martens’ boat.

For the Bassmaster world, especially those who work behind the scenes, it’s hard to imagine how much Mason will be missed.