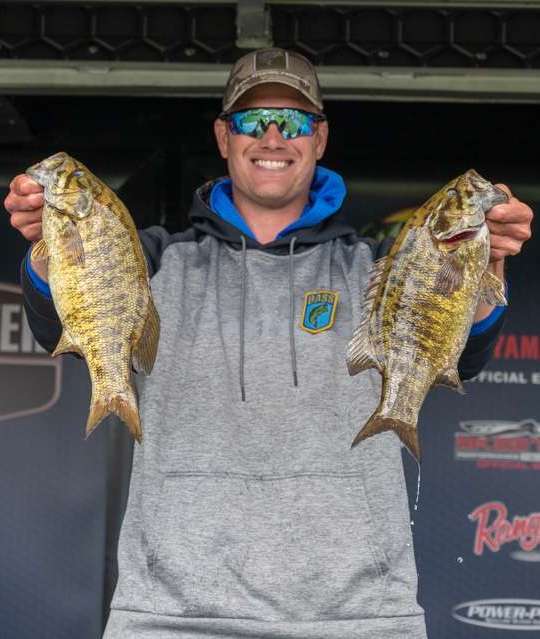 This is unbelievable. I can’t really wrap my head around it. This was the first tournament I ever fished by myself as a boater.

I have a wife, Alana, and two kids, Natlie who is 4 years old and Benjamin who is 2 years old. I bought an insurance agency a while ago, and I go to work every day. My truck is 10 years old, and my boat is the same. (I might upgrade in the near future, though.) I don’t have any sponsors. My world is pretty ordinary for a guy who just won a big, professional-level tournament.

I have fished Oneida Lake a lot. I fish a lot of team tournaments on the lake during the weekends. And I live about an hour and 46 minutes away from the ramp we launched from last week. But I’m by no means the guy the other anglers fear. I’m not a hot stick on the lake.

The whole thing is surreal. I’m trying to think things through and make sense out of them. It isn’t happening, though. I just pulled into my driveway. The kids made signs cheering me on. They’re hanging from the garage. And, people are starting to arrive to celebrate.

The celebration will be a big one too. We have a lot of friends. They’re all coming by to congratulate me. Alana is from a big Italian family. I think every one of them is either here or on their way.

One thing I do want to address that I’ve been asked about is what plans I have for the future in fishing. My answer is go back to fishing team tournaments with my brother, Jake, and make a run at the Bassmaster Team Championship. Everything I’ve accomplished in fishing up until now has been with my brother. He was on the water with me Championship Saturday. It meant the world to me. We did it.”

But when I do think about the Bassmaster Elite Series now I have to say that it’s not something that appeals to me. I know it’s the best circuit there is out there, and it would be an honor to be a part of it. But the travel and the time away from home wouldn’t work for me. Heck, I spent a few days in a camper last week, and I missed them terribly. What in the world would I do if I were gone for weeks or months at a time?

I don’t criticize the guys who do it. It’s a choice that works for some guys and their families and not for others. I’m in the not for others group.

Another thing I’ve been asked about is what it’s like to be leading on the final day knowing that there’s a local hammer right behind me, and right behind him are three top professionals.

Frankly, the local hammer, A J Slegona, bothered me the most. I know him. He fishes Oneida a lot. He’s a smallmouth guy. I know what he’s capable of bringing to the scales. He’s a man to be taken seriously when he’s on your tail.

Maybe I should have been as afraid of the pros, but I don’t know them so I didn’t think as much about them. I think anyone could have won that was in that Top 10. There were two super tough days of fishing, and it showed a ton of heart just to be still standing.

I don’t have anything else to say about my win at the 2021 Basspro.com Bassmaster Open at Oneida Lake. Honestly, I’m having trouble comprehending it. I sell insurance.