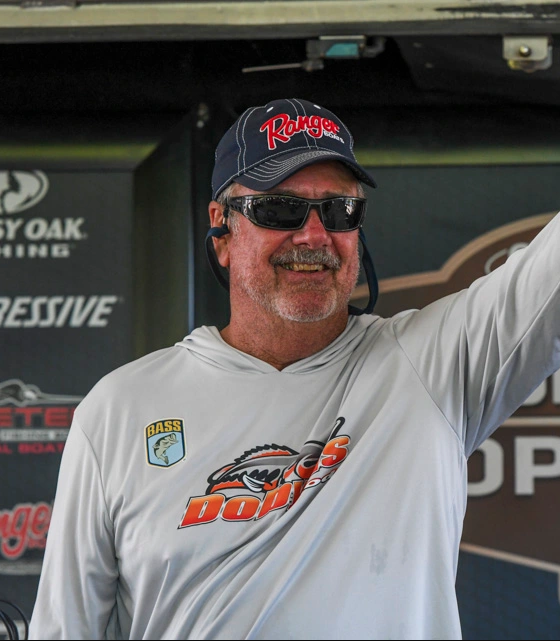 Next month, I get to come back and restart my career at B.A.S.S., and it’s a homecoming of sorts considering it’s where I spent my first 29 years fishing. The truth is, I never wanted to leave, but it was a situation that couldn’t be avoided at the time. Tournaments were scheduled on top of each other, and I was obligated to sponsors.

Last year, I realized it was time to make a decision regarding my career as I got closer to retirement — although I’m sure not yet ready to quit. I thought really hard for several years about coming back to B.A.S.S. Everything started falling into place last summer. There was talk of an exemption available to anglers with Legends points also currently competing in the St. Croix Bassmaster Opens. To make it official, I fished the 2022 Central Open at Sam Rayburn and then accepted the invitation to the Bassmaster Elite Series through the Legends exemption.

What I missed the most about B.A.S.S. was the amount and level of publicity you get from an organization that started it all. The B.A.S.S. media covers everything you could ask for as an angler, from Bassmaster Magazine and B.A.S.S. Times, to the website and, of course, the Bassmaster LIVE TV show on FOX Sports 1 and Bassmaster.com.

I’m a B.A.S.S. Lifetime member and that should tell you a lot about my loyalty. That was another influence in keeping the fire burning for me to want to come back. Whenever I came to work for sponsors at the Bassmaster Classic, I met many of those lifetime members from my generation, and there are many of them. Year after year, they would say, “Larry, come back and fish B.A.S.S.” Hearing that from other respected members and trusted anglers always gave me a great feeling about returning.

The main goal I want to achieve this year is just be successful fishing. I want to be consistent and competitive in the Bassmaster Angler of the Year standings. That’s hard enough these days given how good the younger guys are on the Elite tour. I also realize what I’m up against there, but I still have the competitive drive.

A lot of times, we all find the same patterns, the same fish, and it comes down to stamina and strength. I can’t physically compete like that anymore. I just want to come back and prove I can have a shot at making the Classic. Just making the Classic is one of the greatest achievements in bass fishing, and I made it 25 times in 29 years of trying.

How I’m going to compete this year is like I always have over my career — fish my instincts. I’m not going to change that, even with forward-facing sonar and all the new things out there. I don’t want to confuse myself with anything I’m not really good at doing that would make me less confident in my proven abilities.

If there is one thing I do have, it’s that very instinct to make decisions. I learned that all the way back when I guided over 300 days on Toledo Bend. With all the tackle and electronics that we have out there, none of it can compete with time on the water, and I have a lifetime of it.

To me catching fish is a habit, and being on the water as much as you can helps you make instantaneous decisions on why the bass are biting today, are not, or what is different from yesterday. When you are in the habit of catching fish, you just know that sooner or later you are going to figure them out.

Now, forward-facing sonar is a different animal, because 90% of the time you are fishing for bass that back in my heyday were uncatchable. We couldn’t visually pinpoint a bass. We could see suspended fish, but we had no way of seeing how to keep the bait inside that strike zone. Even with forward-facing sonar, it comes down to instinct, as in knowing when and where to fish. Instinctively putting together a pattern and fishing my strengths is what I plan to do.

Back in the early years, that’s how guys like me, George Cochran, Denny Brauer, Rick Clunn and others excelled at this game. We all fished or strengths, be that structure fishing with a jig and worm, like me, or flipping and pitching like Denny, or fishing shallow water like George and so on. We rarely ever fished around each other; instead, we all fished our strengths. So, it will come as no surprise that I am going to keep things simple. A jig and worm are my most reliable baits, day in and day out, for the last 45-plus years.

Will this be my final lap around the track at B.A.S.S.? It’s not my plan to retire, yet. I’ve had many surgeries over the years from this long career that takes a toll on your body. But I’m going to come back to B.A.S.S. and finish happy, however long that is, which is ultimately what I wanted to do.

The first Bassmaster millionaire, Larry Nixon’s consistency on the trail is unmatched. For 12 seasons between 1977 and 1988, Nixon never ranked lower than eighth in the Angler of the Year points standings. For nine consecutive years – 1979-1987 – he was in the top five, with AOY titles coming in 1980 and 1982. In addition to winning the 1983 Bassmaster Classic on the Ohio River, the 25-time Classic qualifier finished in the top 10 an astounding eight times.