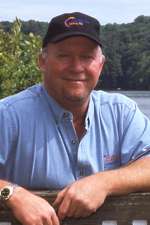 It’s that time of the year, the time when everyone and their brother starts talking about the thermocline. And, as you know, most of the talk says to stay above it or you won’t catch any fish. I say bunk to that. It’s just not true. There’s plenty of big smallmouth below the thermocline and you can catch them if you fish correctly.

There’s no arguing that there’s less oxygen below the thermocline, but there’s less need for oxygen because the water’s cold and the fish aren’t moving around very much. In my opinion the really big ones drop down that deep because of the safety of deep water and because the water’s a lot colder. It’s easier on them and that’s what big smallies are all about, an easy life.

I first learned about this from a local guide who is also a scuba diver. He noticed that in the summer when he’d drop down right on the thermocline and bang two rocks together, big smallmouth would come swimming up from the depths. He did this year after year under all sorts of weather conditions and he always saw those big bass swimming up towards him. That taught me two things.

First, smallmouth are curious creatures. Sometimes a little sound or something different — like a lure they’ve never seen before — will get their attention when nothing else will. It’s a weakness they have that we should never forget.

Second, the idea that the fish stay above the thermocline is untrue. We know from his experience that they don’t. They often live well below it, or at least hang out down there.

If you want to catch them, you have to get down to them. There’s several ways to do that but I’ve come up with a way that I think is the best and you don’t have to do that long-lining stuff that everybody’s talking about.

I’m not saying long-lining doesn’t work. I’m saying it’s a lot of work to accomplish something that can be accomplished much easier.

All you have to do is take a heavy Hail Mary jig, tie a 3-foot fluorocarbon leader to it and then attach a Smithwick Rogue. Drag it along the bottom. The bait will wiggle, the fish will bite it, and you’ll catch better than average size smallies.

Now, I’ll be the first to admit that my experiences with this are all on Dale Hollow Lake, a deep, clear highland reservoir. But I can’t see why the same thing isn’t taking place all around the country. It’s common sense to me. Smallmouth are smallmouth no matter where you fish.

Even if I’m wrong, though, I’d have to find it out the hard way. It’s too easy to fish shallow and blame your lack of success on the moon, recreational anglers, the forage or something else that has nothing to do with anything.

Most big smallmouth are deep. It’s a fact we have to deal with.