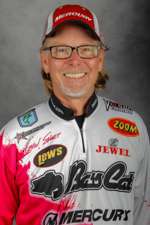 DEL RIO — How does a guy whack 33 plus pounds on Day 1 and not bring a single scale to the weigh stage on Day 2? I’ve asked myself that question a thousand times in the past 24 hours. Lots of people have asked me that same question in the past 24 hours. Best that I can come up with is that I ran into them on Thursday during the course of the day and ran out of them on Friday.

The early phase of the spawn when the fish get started moving shallow has always been the hardest for me to figure out. For years, I have dreaded the onslaught of the spawn. I would lie awake at night before spawn tournaments in a cold sweat, dreading having to deal with the evil spawning bass the next day.

It has always been much easier for me to pattern fish when they are bunched up before they actually start migrating and roaming the shallows. When they start that funky roaming thing, you can find a school in on a point in the main lake one day and they may move a quarter mile back in a pocket by the next day. So is that what happened to me on Day 2? Not exactly.

I really didn’t have that great of a practice; not anything like last year, when the fish were full on spawning and it was easy to catch 30-40 per day. Last year at Amistad I played the numbers game and it bit me in the butt, as I missed the cut by less that two pounds.

This year I resolved to fish bigger baits for bigger fish and spent my practice time looking for pre-spawn fish that were staging on the outer edges of spawning flats and small pockets off the main lake. I found a few areas where I was catching fish along hydrilla lines and scattered bushes on a Norman DD14 — my kind of stuff. Wasn’t catching that many fish, but when I did it was a 4-5 pounder, which I felt was the quality that I needed to have a chance at winning the derby.

Day 2 dawned cloudy with the normal 10-15 mile per hour wind out of the southeast; first day that it had been cloudy on Amistad in at least a week. Started on my best hydrilla edge and went for an hour with just one small non-keeper. Ran around to the next area and caught a 3-pounder that I noticed came from a bush that was shallower than I had been catching them. Hmm, I wonder if these guys have moved up shallow with the clouds?

Pulled out an old school Norman Big N, moved up from 15-20 foot of water to 8-10, and it was game on. The clouds had definitely moved some fish up that were actively feeding and roaming the shallower inside edges of the hydrilla. All I had to do was drive down the lake and find shallow pockets with grass clumps where the wind was blowing directly into it and I could call my shot. It was sick.

Why would these fish leave? Where would they go? Better yet, why would they go anywhere? The water was warming, they were in the guts of spawning pockets, what more could they want? It’s pretty obvious now that they had somewhere else to be or something else on their little green minds.

Day 2 dawned with some clouds, but not nearly as much wind. No worries, might just have to slow down a little; throw a soft jerkbait, fish a spinnerbait a little deeper, maybe drag a rig around. I was ready for anything. Anything except not catching a single keeper.

I suppose knowing when to swing for the fence and when to play small ball is the difference between a truly versatile angler and just another guy on the water. Day 1, I felt like I was a pretty versatile angler as I followed the fish up shallow and whacked a monster bag. At the end of Day 2, I felt like just another guy taking up space on the pond.

I had the opportunity during the day to catch a few keeper fish that would have kept me in the paycheck line, but not keep me in the hunt for the win. I fished shallow, I fished deep, and everywhere in between. Threw pretty much everything in the boat. Pretty damn frustrating to be so close and come up empty-handed.

That hunt for the win has always been the bottom line for me. Do you want to fish for a limit every day and pray that they are just big enough to get you a check or do you want to fish for the bigger fish that you know will give you the opportunity to win the game? I’ve always gone for the kill and that’s why I’m either at the top of the food chain or down with the plankton.

Thursday on Amistad, I was roaming with the sharks. Friday I was schooled up with the minnows. Sucks to be a minnow.