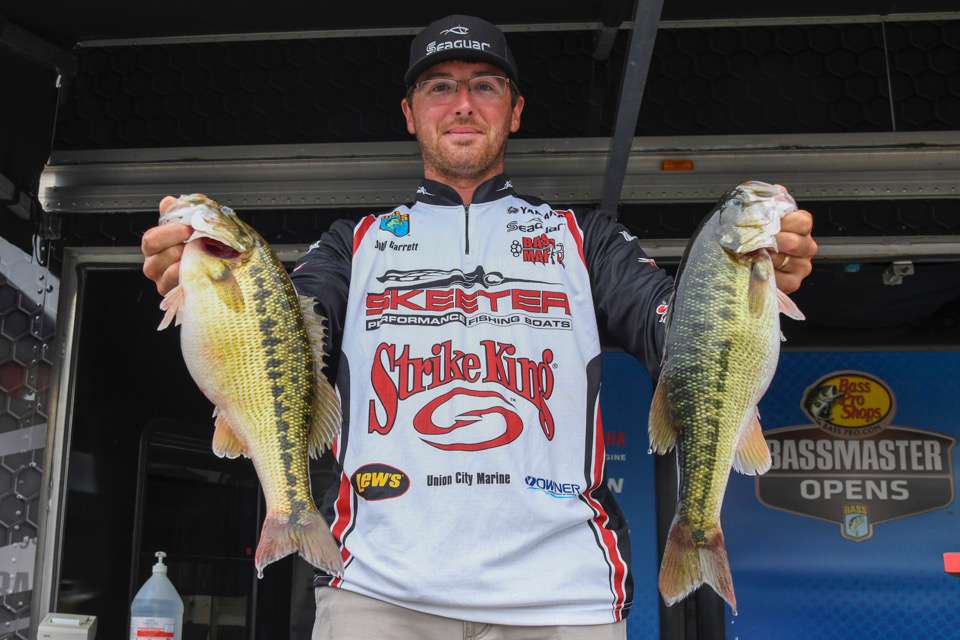 The big question for me is how will I perform for the rest of the season? So far it is not what I expected after three events (details below), especially after my results for last year. I finished one point short in the 2021 Bassmaster Open Central Angler of the Year point totals for qualifying for the 2022 Bassmaster Elite Series. I am totally committed to fishing every event in each of the three 2022 Open Divisions in hopes of earning a spot in the Bassmaster Elite Series for the 2023 season.

The first event in the Southern Opens division was held at the Kissimmee Chain of Lakes in Florida Feb. 3-5. It had been a busy season guiding duck hunters for me, but I certainly was ready to abandon the rain and cold temperatures of West Tennessee and head to Central Florida for sunny, warm days on the Kissimmee Chain of Lakes. From pre-practice to tournament day, the weather was as cold as it was at home, and the bass were not cooperating.

I only managed a pedestrian finish at 60th place with a two-day total of 18 pounds, 15 ounces. I managed to catch a small limit both days flipping a Strike King Rage Bug soft plastic bait, but I just could not locate the bigger bites. Almost all the tournament anglers were also struggling to find the bigger bass. I finished just 2 pounds, 8 ounces away from 40th place and the associated monetary payout. The only positive from this tournament was that I did accumulate 140 points towards the Bassmaster Opens Southern Angler of the Year award, so I was not totally out of the Southern division AOY race for 2022 after one event.

The next event on our schedule was the second of three events for the Southern Division and was held at Cherokee Lake in East Tennessee March 31 to April 2. Once again, the results were almost a carbon copy of my Kissimmee performance. I was at a loss as I could not find bass of any size in practice or during the first two tournament days. I finished in a dismal 171st position.

There will be no rebounding in the Southern Division for a top spot with only one event left in that division. I had come away from Cherokee Lake with very few AOY points, and my mind was cluttered with “what if I had tried this technique” or “I should have tried that lure.” With the last Southern Open event scheduled at Lake Hartwell in September, my plan for the Southern division must be to win that tournament and thus qualify for the 2023 Bassmaster Classic.

My next 2022 Open event was the season opener for the Northern Division that was held on the James River in Virginia from April 14-16. This event offered a clean slate for everyone, and I was more than ready to shake off the memories of my first two Open events and approach this event in a positive manner. I felt like I was in a sophomore slump from the first two events. I was not exactly sure why I performed so poorly as I know I can find and catch bass, but in the first two events, I was just not connecting.

The James River event started out the same way as the previous two Southern Opens, with the bigger bass extremely hard to locate. I managed to catch a lot of bass in practice, but they were all small. During practice, I burned more than 150 gallons of expensive gas through my Yamaha outboard while making several long runs from one end of the area to the other. I was trying to find a pattern to focus on for the tournament.

On the first tournament day, I was flipping and pitching a Strike King Rage Bug into any shoreline cover in an area I found in practice. I caught bass all day, but my final limit of five bass were all about 2 pounds each for a total of 10 pounds, 4 ounces, placing me at 120th place. I had to change something for Day 2, or I would have a repeat of the previous two tournaments results.

My draw number for the second day takeoff put me at the tail end of the 225 tournament boats. By the time I made it to my chosen starting area in a creek off the James River, I could see so many anglers that were already following each other, fishing every bit of cover on the creek banks. I knew there was not going to be much opportunity for me in fishing the same cover on the same shorelines after all of these anglers had thoroughly fished them.

I started looking for something different offshore from the riverbank and away from the rest of the competitors in the area. By the early afternoon, I had five keepers in the livewell again with about 10 pounds of weight, but I knew that would not be enough for success and time was running out.

Just before I had to start back to the tournament check-in location, I noticed an offshore location on my electronics that looked promising. Honestly, after studying the area, I got excited about the possibilities and what I could see at this site with my forward-facing sonar. I changed my lure choice from the Texas-rigged Strike King Rage Bug I had been using and tied on a drop-shot rig with a Strike King Super Finesse Worm on my Lew’s baitcaster rod and reel and began to cast into the area.

The next few minutes were absolutely amazing as I caught bigger bass on five of the next seven casts and culled every bass in my livewell. On my last cast with time running out, I hooked a huge bass, but the bass managed to win that struggle and got off the hook. Trying to land that huge bass took up a lot of time and that made me a little nervous that I might be late for the weigh-in.

I was checking the time for each landmark along the way back to the check-in site, and I made it to check-in but with only a minute or so remaining, which was a great relief. My five bass limit ended up weighing a very respectable 20 pounds even, which was the third largest limit to be weighed in on Day 2.

The upgrade allowed me to move from 120th place on Day 1 to finish in 26th place for the event, and I won $3,450 in prize money along with valuable AOY points.