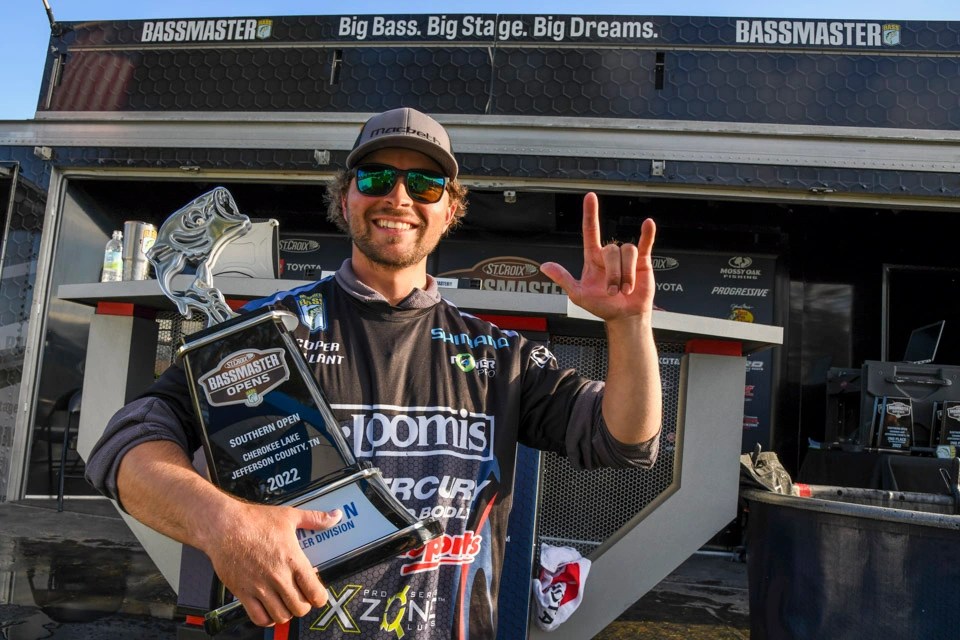 When I sit back and really start thinking about winning the St. Croix Bassmaster Southern Open at Cherokee Lake presented by Mossy Oak Fishing, I still feel like I’m dreaming. I have been to five or six Bassmaster Classics over the years, and I’ve been in the stands and behind the scenes a little bit. Every time I’m there, I’m just dreaming about being on that stage one day. To actually make it happen this past week on Cherokee Lake is a dream come true, and I can’t believe it happened.

It was super awesome having my dad there. It was a last minute thing, and what’s crazy is, my mom said the other day on the phone that dad told her, “I have a weird feeling that I should be there.” That is the reason he flew down, and I ended up winning the thing.

He flew down the day before the tournament and helped me with filming for my video series, and he was there to support me in any way he could. It’s like having my own pit crew; he is a super handy guy and if something happens he can fix it. I wish my mom was here to see it all, but by the sounds of it some of my family will be coming down for the next one on the James River.

Before the tournament started, I knew I was on a good deal out deep, but I wasn’t sure if it was going to hold up because we had a warm front coming through. On Day 1, I dropped my trolling motor in the water, and it was 52.5 degrees. I kind of smirked to myself because I knew It was going to happen. The water was still cold, and I knew they weren’t going to move to the bank just yet.

Within the first 10 minutes of Day 1, I had about 15 pounds in the boat and knew it was going to be a pretty good day. After the day I was sitting in eighth place and I looked at my dad and said, “Man, I have a legitimate shot at winning this thing.”

To be honest, throughout the season, the Classic is not on my mind; the Elite Series is. Coming into it, I just wanted to get some good points for the Elites. Landing in the Top 10 after Day 1, that is when it really started to set in, and I knew I left a bunch of fish out there. I started to realize that I was only five fish away from a Bassmaster Classic berth, which has been a lifelong dream.

Every tournament I have won, it is like I blackout. I don’t remember much about being in the hot seat waiting to hear the results. I don’t even really remember what happened during that moment on stage. It is like I’m in shock, and it feels like I woke up from a dream. That’s why I like filming and documenting it so much; I am able to look back and relive the moment.

I think it is so huge for the sport of fishing and so huge for the younger generation to see when the anglers hang around and watch the winner get crowded. I know Brandon Palaniuk does it at all the events. I remember being up there and seeing fellow Canadians Jeff “Gussy” Gustafson and Jamie Bruce while I was on stage. It was super cool seeing them and chatting with them at the end of it. I don’t know about other anglers, but when I see fellow anglers hanging back to watch it all unfold at the end, I think that’s huge. I think it means more to the anglers than people actually realize.

That is what it is all about, and again, seeing all the other anglers who decided to hang back and congratulate me was super cool.

I wouldn’t be able to do this without my friends, family and sponsors. I have dreamt about being on the road for several years now, and to actually be doing it and win an Open and head to the Classic are all dreams come true. I’m very thankful for everyone at B.A.S.S. for giving us the platform to chase our dreams. I thank my sponsors, friends and family for the continued support in watching and supporting me while I chase this crazy lifelong dream.

For everyone who wants to watch how it all went down on Cherokee Lake, make sure you visit my YouTube channel, Cooper Gallant Fishing, and watch the second episode of my video series called The Elite Series Chase. I do nine episodes, and each episode is about 20 or 30 minutes showing what it is like being a tournament angler and sharing my journey fishing the Bassmaster Opens, both on and off the water.

Momentum is everything in this sport, and I’m hoping I can carry it along the rest of the season.