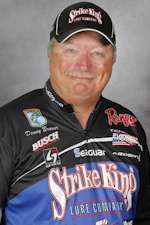 Nevertheless, it all starts with the reel. Over the years I've developed a set of features every good flipping and pitching reel should offer. Here they are:

1. The Spool — A great spool will be narrow and hold a relatively small amount of line. It'll also have a peg to which you can tie your line directly to the spool. This will avoid slippage around the spool when you put tension on the line with a low-capacity spool

2. The Worm Gear and Levelwind — Contrary to what you may think, there's no need for a worm gear and a levelwind on a flipping and pitching reel. All they'll do is increase friction and cut down on the ease and length of your cast. If you have one big, fixed eye through which the line passes with a direct pull you'll be better off in the long-run.

3. The Drag — You really don't need an adjustable drag when you're pitching and flipping. Most of the time you'll be pulling bass out of heavy cover. Allowing them to pull line off the reel only creates problems. A fixed drag, set at a relatively high pound test, will do just fine.

4. The Flipping Switch — A switch that engages the gears when your thumb comes off the button is handy if you're right-handed. I don't need one because I'm left-handed, but you right-handed anglers will save a lot of time, and more than a few fish, if the gears pop into place as soon as you lift your thumb off the button.

5. The Handle — You put a lot of torque on the handle and the paddles when you set the hook at close distances, which is a typical flipping or pitching pattern. Once they're bent the reel won't wind right. They need to be strong and tough — much stronger and tougher than on an ordinary reel.

6. The Ball Bearings — A good flipping and pitching reel must be smooth and offer as little resistance as possible when the line is turning the spool during a cast. This allows you to handle light lures and will dramatically improve your accuracy.

Because of my association with Ardent I've had the privilege of helping design what I believe is the best flipping and pitching reel on the market today — the F700 Denny Brauer Signature Flip & Pitch Reel We incorporated every characteristic I've mentioned into this reel, and a few others for good measure. If you're serious about your pitching and flipping I suggest you give one a close look before you buy anything else.

Now, I'm not saying you can't catch bass with something else. You can. I am saying, however, that I have decades of experience flipping and pitching and that I've used and abused the F700. It's the best.

Next month we'll talk about rods.