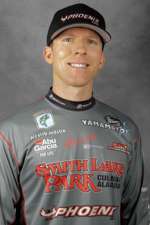 Start competing in tournaments at the club level and work your way up while being careful not to jump levels too quickly. Once you’ve proven you can consistently compete at each level, you’re ready to move up to the next. Jumping levels too quickly can stall your progress by hurting your confidence.

Fish with anglers who have more experience than you do. Doing so can expose you to new techniques and patterns quicker than discovering them on your own. I fished as a co-angler for a few years prior to moving to the front of the boat and picked up several techniques more quickly than I could have on my own.

Learn to cover shallow water quickly and efficiently with reaction baits. Three days of official practice sounds like plenty of time to break down a shallow water fishery, but it’s not. The time goes by fast. The anglers who effectively cover more water stand a better chance at finding more and bigger fish, which leads to more success.

Fish bodies of water on the Elite Series schedule. The Elites visit large fisheries, which require an angler to have a detailed game plan going into official practice. Ideally, you’ll set boundaries by picking a section of the lake to focus on while targeting certain groups of fish. Otherwise, the amount of water can become overwhelming and you’ll waste time being unproductive. For example, I’m going to spend my time fishing just below Paris Landing to the dam along Kentucky Lake’s river ledges with proven techniques like a heavy swimbait, spoon, jig and worm during the summer. I know from past experience focusing on the middle to upper end of the lake gives me the best opportunity to find the winning school(s) of fish.

The Elites stop somewhere along the Tennessee River every year, and if you aren’t proficient reading your electronics, you’re going to be at a huge disadvantage. When I moved to Lake Guntersville, I forced myself to spend significant time idling and graphing up and down the river channel during the summer months. Soon, I became proficient at finding, marking and catching the fish I marked on my electronics.

Competing on the Elite Series is expensive, so have a financial plan in place to ensure you’ll have the funds to compete. I spent roughly $70,000 competing each season, which included my entry fees and expenses. I often slept in the back of my truck and ate rice and tuna (out of the can) to save money while trying to qualify for the Elites. Take every opportunity to save money now and set it aside for when you join the Elites.

Once you’ve qualified for the Elites, make sure the time is right before joining. As Randall Tharp pointed out in his article, “Third time’s the charm”:

“It seems that every year there’s a new crop of anglers looking to get into the Elite Series. Some of them are desperate to make it to the top, and they’ll jump at the first chance they get.”

Tharp exercised patience and waited to accept his invitation to join until his third qualification when he knew he was ready. I, on the other hand, was anxious to compete despite knowing the timing wasn’t quite right. Joining too soon cost me the opportunity to continue competing in 2016 on the level I’d worked so diligently to achieve.

The most successful Elite Series pros I know are also the most confident. You don’t obtain confidence all at once, but rather piece by piece like assembling a puzzle. Time on the water is cumulative, and the more time you spend fishing, the more experience you’ll gain. It’s these experiences you’ll learn from and continue to draw from on your path to the Elites.