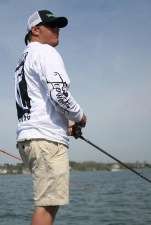 PEKIN, Ill. — A line of severe storms rolled through Illinois this past Sunday, Nov. 17, dropping several tornadoes that devastated the towns of Washington, Pekin and Peoria. The National Weather Service reports that 15 tornadoes hit the state and at least 900 homes were destroyed or badly damaged.

Among those affected by the storms was Luke Stoner, president of the University of Illinois Bass Fishing Club.

“After the storms had passed on Sunday, I talked to my family and found out my friends and family were OK but that my grandmother’s house was pretty damaged,” said Stoner.

“When I went home Sunday, there were gas leaks and the power was out, so in the chaos there wasn’t much we could do to help but clean up some of the debris.”

“The whole team contacted me and said you need to get hold of Don and let him know that we want to help,” Stoner stated. “Barone said he could use us as his eyes and ears, and we are all really looking forward to helping out.”

The Illini Bass Fishing Team holds a large high school tournament every year, as well as a fundraiser tournament for the club. However, next year, the club is planning an additional benefit tournament with proceeds going to those affected by the storm.

“It is great to see everyone come together and help each other out in a time of tragedy,” said Stoner. “This just shows it will take more than wind to knock the Midwest out.”

To learn more about Tackle the Storm, click here. Learn about other ways you can help, too, in Tazewell County and Washington. View photos of the devastation in the area, plus video of it below.